As usual, the Alioune Blondin Peacekeeping School Beye was a place of meetings and initiation of various partnership initiatives in support of activities promoting peace and security.

Thus, the month of September saw new collaborations and the strengthening of already existing partnerships.

10/09/20 Visit of his Excellency the Ambassador of Algeria, Mr. Boualem Chebihi, and his Military Attaché, Colonel Messaoudi Rachid. Discussions focused on the Algiers accords, peace and stability in the region. 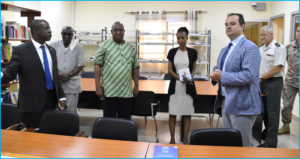