Donation from Japan to EMP-ABB 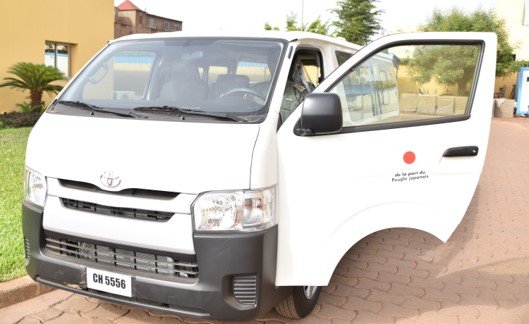 On Friday May 01, 2020, Japan donated a 15-seater minibus to the Alioune Blondin Beye Peacekeeping School (EMP-ABB) in Bamako.
A long-standing strategic partner, Japan also sits on the Board of Directors of EMP-ABB and has, among other things, funded numerous training courses such as "DDR", "CIMIC", "RSS", "JT", " Gender ”,“ IHL ”,“ GRC ”; as well as seminars, such as that on "Development of Northern Mali" for the benefit of the CNJVR, representing a contribution of up to $ 4 million in 2019, for more than 651 civilian, military and police trainees trained and coming from a dozen of different countries, including peacekeepers from UN missions and the African Union. In 2020, Japan also funded the “Gender” and “IHL” internships for the benefit of the G5 Sahel Joint Force.
The acquisition of the new 15-seat minibus, in addition to the 04 4X4 vehicles also offered by Japan in 2019, strengthens the aging fleet of the EMP-ABB.