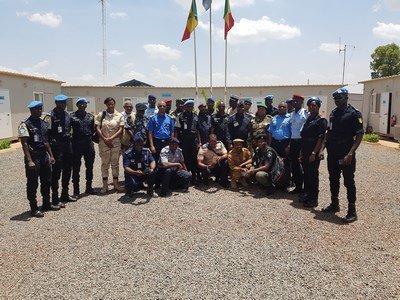 The EMPABB in partnership with the GIZ organized training for contingent commanders of the constituted police units (UPC) with funding from the Federal Republic of Germany. Participated in this two-week training (May 15 to 26, 2017), the 15 member countries of ECOWAS including 03 women.
The management team was made up of Malian trainers and MINUSMA:
- CPP Baba MARIKO, EMPABB, Director of the course;
- Squadron leader Boubacar DIAWARA of the Malian gendarmerie, IT;
- Lieutenant Mohamed KEITA of the Malian gendarmerie, IT;
- Unpol Samuel HAMMAJABU from Nigeria, MINUSMA, IT.

The Economic Community of West African States (ECOWAS) has made a significant contribution to peace and security in the West African region. Through its peacekeeping interventions in Liberia, Sierra Leone, Guinea Bissau, Côte d'Ivoire, Mali and The Gambia, ECOWAS has demonstrated its willingness to intervene in Member States to ensure the achievement of peace, security and economic integration.

Gaps in capacity in the police force during interventions in these conflicts and in post-conflict situations were identified during the Training Needs Assessment conducted by the ECOWAS Standby Police Component in 2013. Several recommendations including strengthening the capacities of Commanders of the Constituent Police Units (UPC) were made. Strengthening police capacities adapted to conflicts and the post-conflict situation is a priority for ECOWAS.

Formed Police Units are deployed in environments that are fundamentally different from their policing contexts in countries of origin to serve in post-conflict or fragile situations. The Police Contingent Commander who commands his cohesive mobile police force unit, provides support to the host state during its peacekeeping operations and ensures the safety of personnel and missions, primarily through a effective management of public order. He / she is appointed by his / her Government and acts as a representative of the Contingent.

OBJECTIF
The FPU commanders' course aims to strengthen the capacities of the Police and Gendarmerie personnel of ECOWAS Member States and to prepare them for deployment in future Peace Support Operations.
At the end of the course, the Police Component of the ECOWAS Standby Force (FAC) therefore has a group of 20 Police and Gendarmerie personnel equipped with the skills and abilities necessary to be able to fulfill the roles of UPC commanders as needed. Participants learned skills in collaborative policing, which will also have an impact on the delivery of their responsibilities and tasks in their home countries.

PARTICIPANTS
Participants will come from the 15 ECOWAS Member States.

Attached are some photos taken during the visit to the Senegalese FPU contingent deployed in Bamako as part of MINUSMA. 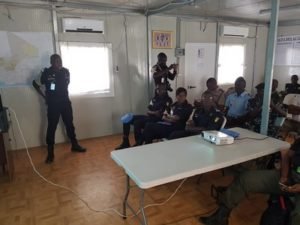