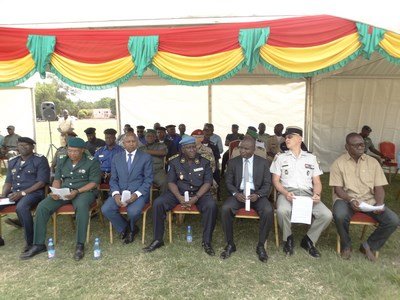 On May 12, after 8 weeks of intensive practical training, 24 Malian police and gendarme trainees regaled us by carrying out for the end of their training a series of large-scale dynamic demonstrations of formidable realism. 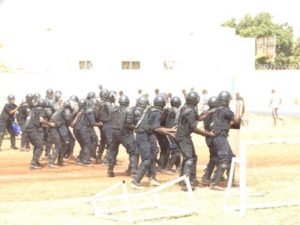 From March 20 to May 12, 2017, the first training course for trainers of formed police units was held at the Peacekeeping School and on the site of the National Police School.
This internship which had as a major objective, to deepen the knowledge of Malian executives in the field of techniques relating to the management of disturbances to public order, in accordance with the obligations of the United Nations namely respect for Human Rights and of the human person, consisted of academic activities and field simulations. 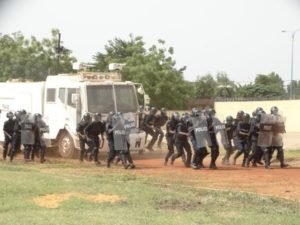 These 24 trainees were selected from among us potential temporary instructors and through a competition organized before the course.

They were entrusted to a team of trainers from UNITAR who enabled them to acquire an impressive number of practical skills to enable them to become good FPU (Formed Police Unit) instructors.

The objective of the training was to give the participants tools essential to the art of pedagogy and the execution of current missions of management of disturbances to public order, to enable them; either to fulfill a function as operational chief within an incorporated police unit, or to train personnel to make them capable of doing so.

For two months they received, grouped into three modules, an initiation in the handling of firearms (Armament), an apprenticeship in professional technical intervention techniques (GTPI), and a training in public order management (GOP) ). 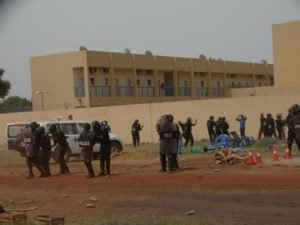 The demonstration was chaired by the Director General of EMP General Moussa Sinko COULIBALY, in the presence of Mr. Evariste KARAMIZI, Manager Peacekeeping Training Program (PTP) of United Nation Institute for Training and Research (UNITAR), and the head of the police component of MINUSMA Inspector General of Police Mr. Issoufou Yacouba.
Among the dynamic demonstrations were presented the following missions:

- reduction of barricade and control of demonstrators

- securing an area after an explosion

- exfiltration of an authority
Thank you to UNITAR for the quality of the 4 instructors and for this partnership which strengthens the instructional capacities of the police component of the school.