The Alioune Blondin Bèye Peacekeeping School (EMP-ABB) yesterday renewed its agreement with the Kingdom of the Netherlands for a total amount of 1,3 billion F cfa. It covers a period of four years. The ceremony took place at EMP-ABB in the presence of the Ambassador of the Kingdom of the Netherlands in Mali, Marchel Gerrmann. It was chaired by the Director General of EMP-ABB, Colonel Souleymane Sangaré. This agreement renewal signing ceremony confirms the confidence that the Netherlands places in EMP-ABB and all staff.

This new support will make it possible to continue conducting training aimed at building the capacities of the various actors involved in peace operations in Africa and around the world.
For Colonel Souleymane Sangaré, EMP-ABB is honored to welcome any initiative in the consolidation of peace in Africa.

The need to promote the culture of peace is increasingly pressing given the many challenges linked to terrorism and cross-border crime in the ECOWAS area and particularly the Sahelo-Saharan strip and which requires adapted solutions, the director said. of EMP-ABB. He expressed his gratitude to the Ambassador of the Kingdom of the Netherlands as well as to the highest authorities of the Kingdom, for their strong commitment to the promotion of peace.

The Dutch Ambassador said this complex world demands a new kind of leader. Before adding that this is the type of leader that EMP-ABB trains. This school organizes training courses where civilians, soldiers and police officers of different nationalities come together to think about a safer future in this region. With this agreement, argued Marchel Gerrmann, his country underlines the importance of this school as an institute and confirms its confidence in the director general. The Netherlands therefore included a note in the agreement, considering that attention to women in peace operations is important. 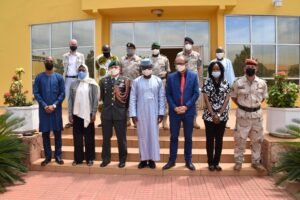 Women are important because they bring balance to our organizations. They think differently from men and look at their environment differently, analyzed the Dutch diplomat. For him, women are at the heart of our families and therefore constitute the basis of our society, and are also often the driving forces of the economy, especially when it has been damaged and the usual patterns have collapsed. . Director Sangaré reassured the ambassador for the massive participation of women in peace operations. The ceremony ended with a guided tour of the premises of the Alioune Blondin Bèye Peacekeeping School.